“For the thing I greatly feared has come upon me, and what I dreaded has happened to me.” Job 3:25

Term: Parademon. Definition (taken from a comic book website, http://www.cbr.com): Genetically engineered, mindless soldiers. Ever heard of them? Don’t worry, I hadn’t either. Parademons are slave to Darkseid, DC Justice League’s arch enemy. My son filled me in on the important details about these half-man half-demon creatures when I told him I needed material for a blog about fear. And since many of my other blog posts have something about Marvel superheroes in them, I figured, why not make it fair and talk about DC this time, much to my daughter’s chagrin. If you haven’t noticed by now, we are a super-hero family through and through.

After finding a video clip on Youtube, I clicked the button and watched as Ben Affleck (Batman) made his action-packed entrance into the picture. I didn’t have to wait long for the parademon to rear its ugly face. These creatures seem to have the form of man but remind me of The Mummy-ugly, shriveled, translucent skin, sharp teeth inside ridiculously large mouths… You get the picture. In the clip, Batman held one end of a rope as a man dangled from the other off the top of a building, fearing for his life. When the poor man asked Ben-I mean Batman-what he wanted from him, Batman’s reply was one word-fear. He proceeds to explain, “they can smell it.” Who’s they? You guessed it. Parademons. You see, according to the comic, parademons actually feed on fear. That’s right, they FEED on FEAR.

What is fear?  In the book of Job, amidst all of Job’s seemingly endless sufferings, his friend shared a dream. “Fear came upon me, and trembling, which made all my bones shake.” (4:14) The Hebrew word for fear is pahhad, or “shaking” (n: “to shake”). Fear does crazy things to us, both mentally and physically. (Image below taken from dreadcentral.com-what a nice website name). 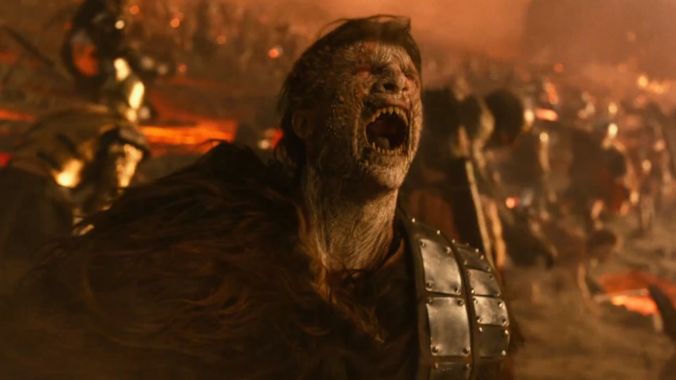 Does It Matter What We Think? Take a minute to think about a time when you’ve been extremely afraid, or terrified. What kinds of thoughts were you filling your mind with? How did your body physically feel? I think the creators of DC knew what they were doing when they created these parademons. Have you ever noticed that when you’re afraid, if you let your mind dwell on the fear, the problem always looks so much worse than it really is? I mean, we could scare ourselves into believing our husband is having an affair every time he picks up his cell phone. Oops, was that out loud? Yep, that was me not too long ago. Because I let the enemy FEED on my FEAR as my mind dwelled on that one fearful thought. If I had continued on this path, eventually, as Job said, the thing I feared could have come upon me.

Here’s the great news. There is a way to rid ourselves of these parademons! 1 John 4:18 tells us, “there is no fear in love; but perfect love casts out fear, because fear involves torment.” If we don’t give them something to feed on, they will disappear. How do we do that? God is love, and if we put on the armour of God, we can withstand even the worst fears. Speak truth instead of lies, think about good things instead of scary, and know the Word, which will help you put your trust in the One thing that can save you from allowing even your worst fears to come true! Remember, that at the name of Jesus, EVERY knee will bow and EVERY tongue will confess that Jesus is Lord. (Phil 2:10)

How about you? I’d love to hear of a time when you allowed yourself to give in to thoughts of unrealistic fears, or a fear that your mind blew way out of proportion. Or maybe it’s never happened to you – maybe I’m the only one?

One thought on “One Thing I Learned from DC Comics”